Attention Christians: Adoption & Abortion
Are NOT In Competition!

Can we please stop racing adoption and abortion down the same track? Not only is it getting old, it's keeping us from moving forward.


I am so tired of trying to have intelligent conversations with Christians about adoption, only to have them try to turn it around and make it about abortion.

Adoption and abortion are not the only two choices in the event of an unexpected pregnancy.

One reason we can't get people to take a good, long educated look at what needs reform in adoption is because people keep conflating it with abortion. My friend Amanda just wrote an excellent piece about this at The Declassified Adoptee. While she is strongly pro-choice and I am strongly pro-life, we are mature enough to have intelligent and respectful conversations. Whether you are pro-life or pro-choice, I beg you to see the danger in blending these two issues.

Why we would relegate the destiny of children to two choices, I do not know. But evidently we have a whole lot of people, Christians included, who believe that only one of two things can happen with an unexpected pregnancy.

Christian, is your God so small you believe only two choices exist?

Recently I became aware of a blog post written by a blogger who was angry about my writings here. She wrote a rebuttal post, saying that I had made valid points, and she could refute none of them. (Okaaayyy...hello, that's not a rebuttal!)  The only rebuttal she had in response to what I said was that,"Adoption is not perfect, it’s simply our answer to a broken world." Really? That's all she's got?  At least she attributed adoption as "our answer".  It's a man-constructed answer that is broken and needs reform. And, untold numbers of adult adoptees are crying out, “Please fix it! We don’t want today’s children facing what we have had to face."

When facing an unexpected pregnancy, there are other choices besides adoption or abortion. If you are a Christian and you don’t believe that, all I have to say is, your God is small.

My God is not weak and He has the answers! The problem is, so many people, particularly Evangelicals and Catholics, are in such a love affair with relinquishment and adoption they can’t see the “something else” that God has provided.

Either we believe God is who He says He is, or we don’t.

Either we believe He changes, heals, restores, and provides or we don’t.

We seem to have enough faith to pray for God to make a baby available for an infertile, couple, but not enough to make it possible for a pregnant woman to keep a baby.

God is God in both situations.

My God restores!
My God does miracles!
My God makes a way where there seems to be no way!

My God does not limit the destiny of children to the man-made choices of eliminating them or giving them away!!!

My God is so much bigger!

[Give a shout now!] Wipes forehead.

People say, “choose this or that.”
God says, “I’m outside of this and beyond that, thank you very much!”

People say, “This is unexpected…”
God says, “I specialize in the unexpected!”

Man says “Impossible!”
God says, “With Me all things are possible.”

I’m so glad I’m serving a God who is not limited to two man-made, limited,  broken choices! 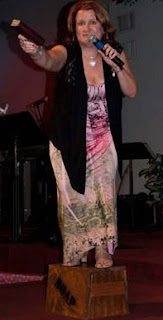 I make it no secret of the fact that I am a Bible-believing, Word-of-God preaching, Devil-destroying, Pentecostal-shouting, Faith-walking preacher of the gospel. And I declare to you right now there is something seriously wrong with our faith as Christians if we can believe God to provide for His people, open blind eyes and deaf ears,   deliver the drug addict, heal the sick, but we don’t believe He has the power to help a mother keep an unexpected baby?

How lame is that?

Sounds like we’ve got a faith problem, up in the church…

God is much bigger than two choices and often he chooses to use HIS PEOPLE as the catalyst for a miracle.  The Word of God says that FAITH without WORKS is dead. Come on church, it's time to rise up and partner with God in doing the work of preserving families!

Yes, there are more than two choices and He will use His people as an instrument of his purpose, power and provision to set the atmosphere for a miracle!

Father, today I pray for an increase of faith across our land. Infuse faith back into Your church! We repent for our unbelief. We confess, we have limited You. We have tried to dumb You down, at times on the altar of our own selfish desires. We have attempted to 'put You in a box' - as if it were possible! Forgive us for limiting You. You are a God of limitless possibilities. Your thoughts and ways are higher than ours. We turn away from man-made solutions, and we look to You.
~Amen