The Search For My Father
Guest Post: Lynn Grubb

Lynn Grubb is one of the first friends I met in the adoptee community. It was early on in my days of being a Lost Daughters blogger when I was having a  triggering day. Late that night, I reached out for support. Lynn, who is also a Lost Daughters blogger and lives almost 1,000 miles from me said, "I wish you lived closer...I'd have you over to the house, right now."

I was so touched by her care.

Since that night, Lynn has reached out in countless ways, particularly as I went through the tragic circumstances with my natural mother last year.

So many people in the adoptee and first parent community know Lynn as a poignant writer. I do too, but I also know her as a caring friend who has been there for me in the midnight hour.

Lynn's the real deal. With her blog, "No Apologies for Being Me!" she's an inspiration to the rest of us to never settle for being anything less than our true selves.  So with that, I bring you the amazingness that is...Lynn.
~ Deanna 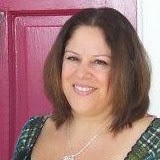 I can’t pinpoint the actual day that I decided I had to find my father, but it had been brewing for a long time.

On my twenty-fifth birthday, six months before I got married, I received my non-identifying information from my adoption agency.  I was shocked to learn that my birth father was unaware of my existence, according to my adoption agency.  However, he was documented in their file as a citizen of Peru with Italian roots, a marketing major, working in advertising, and age twenty-six.  And he was listed as Catholic.

Something must have clicked in my brain around that time wherein I realized that I was in the wrong religion. I had been raised Protestant, in a Presbyterian church where I had married the love of my life, Mark. This thought that I was in the wrong religion would later erupt in my late thirties when I decided to convert to Catholicism, in hindsight, as a way to connect with the father I never knew.

I’ve always felt like I missed out on proper fathering in my adoptive family.  My adoptive father meant well, but the truth was he was a depressed man, an alcoholic, who was emotionally unavailable.  He did, however, provide for the family -- and once in a while would surprise me with showing that he cared.  This sporatic caring was not enough to create a bond between us and when I was twenty-three, he died never telling me he loved me, except when intoxicated.


Like any young woman without a proper father-figure, I was seeking love and acceptance from a man.  I was fortunate to find this in my husband, who probably by no accident, is ten years older than me.  After spending three years in blissful marriage, I  gave birth to our son, Matthew, when I was twenty-eight years old.   After looking into the face of the first blood relative I had ever known, the stirrings of our ancestry started calling to me again.

My former long-term boyfriend would always tell me that I looked like Gloria Estefan but talk of where I really came from was usually not part of our four-year relationship. My husband never acted like my lack of background information bothered him, although he supported me fully in finding out the truth.

My best friend growing up, found her birth family when she was in her thirties wherein she learned that, contrary to what the adoption attorney had told her mother, she was the result of an affair by a married man.  This man and his family have received her with open arms.

As I got more connected with the adoption community on-line, I started to realize that many, many adoptees were told a “cover story” by an agency, attorney or their family but then when they searched for their roots, adoptees found out that they were born to parents who were having some type of illicit relationship – be it an affair, underage, or unapproved of by parents and/or society.

I never gave it much thought I too would fall into this category. I also knew many adoptees whose birth parents later married or stayed in touch.   I kept my eyes on the initial goal – finding my birth mother and once I was successful, I truly believed that she would simply just tell me his name.
My assumptions couldn’t have been farther from the truth.

On day two of our reunion, as we were sitting on the beach October 1, 2006, I gently asked my birth mother who my father was.  Shock and surprise filled my mind when she said that she wished she could tell me but she just did not know.  I immediately knew it was not truth.  I pressed for more information.  She stated that they met at a party, had some drinks and she did not recall the rest.  I decided not to push further and we spent the rest of our time together enjoying the ocean and getting to know each other.

Five years passed where I heard bits of pieces of my story by phone or letter that didn’t completely add up.  At one point, sex at a party turned into date-rape and it sent me into a tailspin.  She was changing the story?  How could this be?  Which story is true?  Are either of them true?

Around this time in 2011, Amanda Woolston, the founder of Lost Daughters, asked me to write a guest post about being conceived in rape.   The news was still raw at that time so I decided to write under the name “Jill”.  I had no idea that within the next couple of years, I would be fully immersed with an on-line support system with other adoptees who loved to write.  I am thankful for that today as I can write this blog post without feeling triggered with pain from these past revelations.

Late 2012, I came across Richard Hill’s book, Finding Family, where he describes his journey of locating his father using DNA.  I was intrigued. I reviewed Richard’s book and interviewed him for Lost Daughters and personally consulted with him on which DNA tests he recommended for me.

I sent my saliva sample into both Family Tree DNA and 23 andMe.  I waited for a long time it seemed and my first sign that my results were complete was the day I received an email from “Jim”.  Jim is married to an adoptee with falsified records and was excited that I was a third   cousin match to his wife.  He needed all of my pedigree information in order to help his wife.  I provided my documented family tree of my maternal side to him, but realized that DNA was not going to be an easy route to my father with no closer matches than a third cousin to another adoptee.

Growing up as “Generic Ethnic”, my most exciting find through DNA was that I am 30% Native American, with relatives in Spain and Mexico on my paternal side.  This answered my long sought- after missing ethnicity.

Fortunately, through my FTDNA profile, the simple act of writing my birth family was from “Naperville, IL” sparked a seventh cousin’s interest (“Bob”).  Bob’s father and I were DNA matches and being a teacher and journalist from the Chicago area and a DNA enthusiast, he contacted me.  His mantra was to “pay it forward” to somebody the same way many had helped him in his 20 year search for his paternal grandfather (the grandfather he grew up knowing was a “non-paternal event” --DNA talk for not being a blood relative).

My new DNA friend jumped on my search with abandon.  Bob went straight to my birth mother’s high school to take a look at the year book from her year of graduation. He figured out who her friends were and got current addresses from the alumni association.  One friend had outdated contact information, so using his connection, Bob stopped by to see the Mayor.  The Mayor directed him to the friend’s address who offered some helpful information and even called up another relative for more memories.

When all was said and done, Bob had amassed more information about my father in one day than I was able to in six and a half years. (Go here to read clues I have about my father).

I was in shock and it was starting to sink in that there may have been a third version to the story of who my birth father was.  It was starting to look like my birth mother was in a relationship with a man who was the wrong race and strongly disapproved of by my maternal grandmother. This was not the story I ever expected.

A picture began to emerge that I was being lied to and I was not happy one bit.  In my shock and anger, I posted about my findings on my blog.  Many people praised me; others chastised me.  “How could you out your birthmother like this?” were the voices of a few.  “I hope you find your truth, Lynn – you deserve it!” were  the voices of many.

My strong sense of personal ethics did not allow me to directly lash out at my birth mother by phone or mail.  The only way I could feel any relief at this news was to write about it on my blog.   I later removed the controversial blog posts and decided instead, to accept that my mother would never tell me the truth.

While processing and grieving the reality that I was lied to and I may never learn the truth, I realized that so much energy went in to hiding my birth circumstances from me—from the lies in my adoption records, the many versions of the story of my conception, to the lies I was told about my birth name on my adoption papers (that it was a nickname).   It is almost comical to think about how it would have been so much easier just to speak the truth, instead of creating layers of lies to cover up a relationship that created me.

At this current time, I continue to log into the DNA websites with the hope of new matches and I have not given up finding my birth father.  Feelings were hurt and relationships have changed throughout my search.  Some people will never understand why I need to know who my father is but I accept that.

Through my search, I have learned that sometimes when we really want something so badly we can taste it, others will kick, scream and fight to stop us from getting it, because it threatens them in some way.  Other people’s reactions to my need to know the truth have been both perplexing and comforting.

It helps to know I am not alone.

Lynn Grubb is a closed-era adoptee, step mother, biological mother and kinship adoptive parent. She is also a paralegal and a former Court-Appointed Special Advocate (CASA) for children in Ohio. Lynn has been in reunion with her original mother and sister since 2006. Lynn writes at her blog -- No Apologies for Being Me.