Are You a Pain Reliever, a Dismisser or a One-Upper? 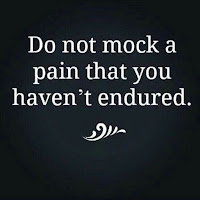 People tend to think that whatever has happened to them is the worst because it’s what they’ve experienced personally. It's common to hear people attempt to "one up" people when it comes to pain...

All these things are the worst...for that person.
And they are horrible things to happen to anyone, in general.

Whatever a person experiences impacts them first-hand. Whenever we lose something relationally, physically, financially or in whatever way – is what we tend to fear as well as talk about the most because we’ve dealt with it up close. It's often becomes a person's passion or mission in life to try to do something about whatever pain they have endured so that others might not have to go through what they did.

Many times those who haven’t faced whatever it is others deal with will have a lack of understanding as to why others are upset. It’s tempting but completely unproductive to judge another person’s pain or their response to it.

In the adoptee community it's a little more complicated being that people don't view what we go through as on par with drunk drivers, cancer or spouses leaving. It's kind of like fibromyalgia. Some people question whether it's real. And that really hurts. I have a few friends who have fibromyalgia and I know their pain is real. How cruel is it that there are people who claim that what wracks these people's bodies with pain every day really doesn't exist? How dare any of us claim a person's pain doesn't exist.

There are very few people outside of the adoptee community that I can be real with when it comes to adoption issues. I used to feel like here was something odd about me in relation to this, like maybe I was just a terrible communicator. But it seems I'm actually a pretty good communicator, and that I'm not alone, at all in my experience of facing a lack of understanding, dismissive people, or one-upping.

What would the world be like if we tried to understand another's pain with all our hearts, refused to compare and instead chose to do whatever we could to comfort them? It does absolutely no good and even does great harm to tell another person, "You don't have a right to this pain."  Or "This pain is not as bad as my pain," or "This pain is silly" or "I've never known anyone else who was in pain over this like you are..."