I Would Love To Comment On Your Adoption Blog, But I Can't. 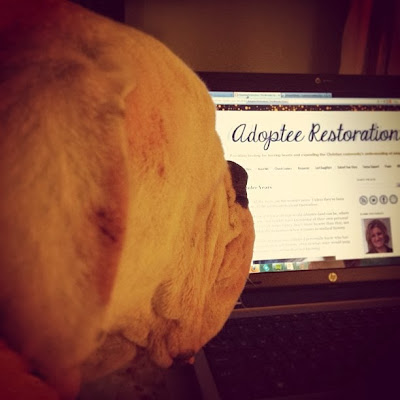 I hear this all the time.

The inbox is the most interesting.

It shows me how far we still have to go.

Consider these true stories. (All names omitted and a few minor details altered, to protect those who have reached out.)

There’s the pastor friend of mine who loves my blog because he was almost adopted. He has lived for a few decades of knowing what almost happened to him. He finds the blog fascinating because it gives him a window into what might have been.

His parents are church members who served in many ways in the church from the time they were just kids. Throughout the years they were choir members, Sunday School teachers, and whatever was needed in the church. They still serve today in many of the same roles.

Back when they were barely out of their teens, and engaged -- his mom became pregnant and they thought their world had ended.

They talked to both sets of parents and adoption was presented as an option. A plan was considered that included sending her to a maternity home.

But they decided they just couldn’t bring themselves to do that.

So, there was an immediate wedding.


Everyone thinks my friend was a honeymoon baby.

His parents went on to have several more children.

My friend was told the secret of his "almost adoption" by an older relative.

Since then he has thought about what it would have been like to not know his siblings...

His brothers and sisters who he is extremely close to and can't imagine not having in his life...

To not have the name he has now...
To not have his real birth certificate...
To not know his medical information...
and much more.

This blog has brought up many additional thoughts for him. He says, “Deanna, I read every one of your posts and think, ‘that was almost me!’ I want to “like” your page, and comment on what you say. But no one knows about mom and dad and what happened back then. If my parents noticed any comments on Facebook, they would be horrified...so I don’t."

This friend is one of many of my friends in ministry who have written to me or spoken to me in person and said, "I love what you're writing, but I can't comment on your stuff publicly...at least right now. I'm sure you know how controversial this is for many people... although what you're saying is true."


The Pastor in Hiding

Then there’s the adoptee who contacted me whose natural father is a lead pastor.

And they have never met in person.

After searching for her father and finding him, she had contact with him once by letter and was refused any further contact.

The only way she can keep up with what is happening with her father is by  reading the website of her father's church, which she does often.

She has heard her father's voice by listening to sermons on the website.
Why must she get to know her father through a website?

Her father doesn’t want his church to know that before he was a Christian or married to his wife, he and his high school girlfriend (who is not his wife) had sex and conceived her when they were sixteen. His girlfriend was abruptly whisked off to a maternity home and the baby given up for adoption.

She wants to meet her father.

Her father doesn’t want to let the church know about her.


This adoptee remains a secret and makes no comments publicly -- because she holds out hope that one day her father might soften up and change his mind.

She hopes, prays and waits.

And Then, There's My Family...

Oh, no worries. No one will figure it out.
I have such a large family.

Among them are several who have written to me privately and said, “I love your adoption blog but I don’t feel I can comment publicly and I’m sure you know why.”

We have a ways to go.

Shame attached to adoption still has so much of it's ugly grip on so much of the world…and the church.

God can change all that if we just let Him.
We don't have to be gripped with secrets, fear and shame.

Until people get free, my inbox will stay as full if not fuller on some days than my comment section.

I pray for a world – and for a church, where people can speak truth openly, without fear.