Why Adoptees and Fantasy = Reality

"Natural children, who have parents, siblings, and other blood-related relatives, are grounded in a reality from which they can spin their images. But adoptees do not feel grounded or connected by any such reality. Much of their imagery is not centered on the adoptive family in which they live as if they belong, but rather in fantasy and imagination. They have a sense that their very perceptions are deceiving them. They have lost the ability to distinguish between what is real and what is supposed to be real."
Betty Jean Lifton, Journey of the Adopted Self

My natural hair color is brown. 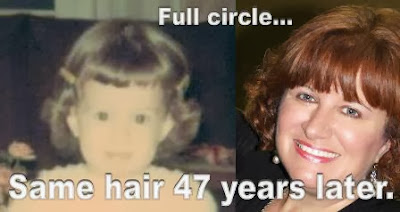 I knew little about my natural mother for the first twenty seven years of my life. So when I pictured her in my head, she was always a lady with brown hair.

Imagine my shock when I knocked on her door the night we reunited and she opened the door and a blonde haired lady stood before me. (She colored her hair at the time.) I had thousands of fantasies about my natural mother and what she was like, and when we entered reunion I discovered many of my fantasies didn't match up with reality.

I had a wonderful Thanksgiving with my family here in Tampa.

I knew where everybody else in my family (those I do know, both natural and adoptive) spent Thanksgiving or had a sense of what the day was like for them, based on holiday times we have spent together in times past. I am an adoptee who has good holiday memories.

At the same time, this quote I shared by B. J. Lifton explains why my mind wandered during various times on Thursday, to what my unknown (paternal) Greek family would be doing, and who they are.

I wondered all the same things about my maternal family before I entered reunion with them. This past year my sister filled in a lot of gaps and shared with me what holidays were like for them, growing up.

I have nothing to go on regarding my natural father and his family, so I pictured them sitting around eating Mousakka.

I didn’t know what else to think.

So this is just what my mind conjured up this time.
It’s not a bad thought, it’s just a fantasy.

For all I know they were not eating Greek food at some fabulous family dinner at someone's house. They could have gone to Denny's and had a grand slam.

For adoptees, there’s a little bit of fantasy in every reality.
And sometimes more fantasy than reality.

While I dine with our family and enjoy stuffing and sweet potatoes (my two favorite menu items at Thanksgiving) I also wonder if my Greek family is eating the same kind of thing, or if they are savoring dolmades.

I wonder if they are breaking dishes on the floor screaming, "Opa!" or if they are washing them in the kitchen. Or if they gave up on dishes and ate off of paper plates.

These are not bad thoughts.
Just uninformed ones.
Someone who is not an adoptee recently point out to me that some non-adopted people’s realities are so bad, they would rather trade with adoptees and have a fantasy if they had a choice.

Perhaps the grass-is-greener myth applies here. People living stressful lives may think they would rather have an adoptee's fantasy. I am doubtful that they would desire it it beyond the honeymoon phase, when it hits them that they don't have a choice.

Most people in the world choose when to incorporate fantasy in their lives.


For the vast majority of people in the world, fantasy is a choice.

Closed adoption adoptees sans reunion, have a fantasy by default -- via their sealed adoption.

This is a fact of life, regardless of their happiness. A closed adoption adoptee who is happy or  at peace with their adoption still fantasizes about their natural family, unless they are in reunion on both sides.

While an adoptee may be at the point of acceptance or peace, an adoptee's thoughts toward their natural family would only be of fantasy, for they simply know nothing different. (Unless they are in an open adoption or reunited.) Whenever their thoughts go to the natural family -- as every adoptee experiences at times -- they have whatever image pops up into their head at the time-- which is always fantasy, since they have no concrete image with which to draw from.

And that is simply reality, in a closed adoption.
Posted by Deanna Doss Shrodes