Emotional Vs. Physical Pain
(And What I'm Discovering in the Storm)

I'm a wordsmith. Words are my deal.
And yet, accurate adjectives escape me.

I woke up to some adoption drama. Yes, that occurs even this far into an adoptee's journey. We will always be adopted no matter how old we get. (When they say, "Adoption is forever..." it really is!)   And our families (birth and adoptive) react in different ways to us, particularly in the storms of life. And they always will do this. It's not always a conscious thing on their parts that they do it. It's not always malicious or intentional, it's just reality. It comes with the territory of being a family "touched" by adoption as some call it, and I have come to accept this aspect and be at peace with it. I will always be different in this regard than my non-adoptee counterparts.

My husband and I got showered and ready and drove to the church office. We have only one car (long story) and I dropped him off there where he had two meetings scheduled first thing. I headed to a hair appointment. With some vacation time falling in different spots yesterday was the only time my hairdresser could do my hair this month. Darn, those grays.


There I was in the torrential downpour of tropical storm Andrea, pulling into a parking space, and went to shift into park with the gear shifter thingy broke. If I would have taken my foot off the brake I would have slammed into the car in front of me. So I was stuck. It was impossible to put the car in park. Sitting there in a tropical storm with a broken gear shifter hanging there -- unable to move forward or backwards, or shut the car off.  I texted my hair dresser and told her I was out there and would come in as soon as I could. She ran out with an umbrella and I rolled down my window and she looked at the gear shifter thingy and exclaimed, "Oh my God!!!"

Yes, it was a time for God if there ever was one. She ran back inside and patiently waited for me. (She's amazing like that.)

My husband couldn't come to the rescue. He had no car to do so and was in two meetings. I called one of the leaders at our church who, along with his family are dear friends. He spoke calm into my spirit and immediately drove over to help. He was able to rig the car up to get the gear shifter thingy to work temporarily. (He's basically a genius.)  I will be forever grateful for him caring so much and so quickly coming to help me, especially in the storm. He even followed me back to the church to make sure I got there okay, and explained to my husband the repairs that have to be made, since we can't count on zip ties to hold our gear shifter thingy on forever. Yes. I. Am. Serious.

I was still able to get my hair done but while I was sitting there waiting with the color on it, a bunch of shrill beeps started going off and they announced it was a tornado warning for the next half hour and everyone in the hair salon may have to cram into the closet together. Yes. I. Am. Serious.

All I cared about were my kids. I know this sounds crazy (and please don't send me judgmental mail to me about this, I just don't need it especially now) but the thought came into my head that it might be more peaceful to be sucked away into a tornado funnel than continue to go through some of what I've been dealing with. I cared less about putting myself in the closet. I've done so much hard work to come out. But I immediately texted the kids and said, "get in the closet." Jordan texted back that they had already herded he and his co-workers into a room at Capital One.

The storm passed and I went back to the office and and my husband and I headed home to get dressed for a ministers meeting. Right before I left the phone rang and I got some extremely bad news. It's news I'm not ready to blog about only because I haven't been able to discuss the details  with every one of my children yet. And they need to know first.

Where is this post going? Trust me, there's a purpose beyond the fact that my day was sucky and I'm venting about what I can make public at the moment.

The news came before the minister's meeting and I cried my make up off twice and had to reapply it for the third time and thought twice about going. But I had committed to go. So I went, but not before my husband and Dustin both held me as I wept. Then the  three of us made the trek to the pastor's meeting we all take part in. (Our 23 year old son is a minister as well.) Of course everyone there said, "How are you, Deanna?" and I said, "Okay." (I've already repented for lying.) It's not that I wanted to cover anything up. I love and trust those that were at the meeting. I hate covering up, but I was on the verge of totally losing it and it wasn't the place for it. Nobody was there to see me fall apart.

I texted a friend and asked if we could talk at 10 when I got home.

Earlier that evening as I was doing my makeup, I had told my husband that clueless people often say things like, "Aren't you glad you weren't an abortion?" or "Aren't you glad you were adopted and didn't end up an abused kid who was burned with cigarette butt burns on your body, or worse? I mean, anything could have happened, but just praise God for what didn't..." (Yes, people do say ridiculous stuff like that!!) Well, first of all -- it's crazy to assume one would be abused if they weren't adopted. And second, I told Larry that sometimes I think if I were the person with a bunch of burns, it might be easier. Because outward wounds are readily seen. When people see pain or scars, perhaps they are kinder and not so dismissive. Emotional pain is harder for people to understand, and sometimes they can traumatize you even more by the lack of understanding or even debate over whether you should feel or express pain.

I went to my friend's house and shared the situation and what I was feeling. She said my thoughts were very interesting to her, because she was severely abused both physically and emotionally. She told me that to this day she has cigarette burns on the back of her head and she has jaw problems that have been diagnosed as an adult from being repeatedly hit in the face as a child. With tears in her eyes she said, "Deanna, I can vouch for the fact that what you are thinking is true. I speak for my own experience, the emotional pain is far worse than my burn scars or my jaw pain."

That was validating for me, strange as it may seem.

After spending time with my friend I came home and talked to my son Jordan about everything.    He's my most affectionate child, even though he's not a "child" anymore -- he's a 22 year old man. He alternately held my hand or gave random hugs while we talked and had some pretty incredible advice for a young man. All of my kids give amazing insight. How did I get so stinkin' blessed?

Savanna is staying at a friend's house for a few days. So I haven't been able to talk with her about everything yet.

I went and readied myself for sleep and was thankful for my bed. I quickly scrolled through my phone to see encouraging messages from friends in the adoptee and first mother community who know the entirety of things. 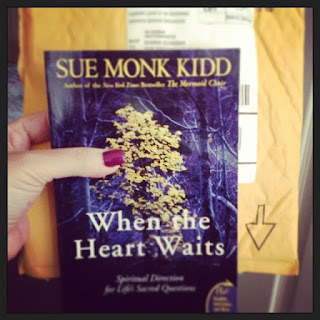 My husband walked in the room just as I was preparing to turn out the light and he said, "I forgot to tell you, this package came in the mail for you today." He handed it to me and I opened it and saw that an adoptee friend, one I met here at my blog, felt led to send this. It's a book called, When the Heart Waits, by Sue Monk Kidd. I have no idea what the book is about but she says it will help me right where I'm at, during this time. My heart was overwhelmed at the thought that this person had taken the time and the expense, to send me a gift.

Love has been awakened like never before in my life.
It's come on a path I never would have chosen for myself, or for anyone.
But it has come.

I hate this path, but I love this love.
Posted by Deanna Doss Shrodes