“You'll stay with me?'
Until the very end,' said James.”
~ J.K. Rowling, Harry Potter and the Deathly Hallows

Taking the elevator down from the fifth floor hospice was a going-through-the-motions type thing. We walked to the parking deck and got in our cars to go to BlileyFuneral home.

The five of us arrived -- Tom, my sister, Aunt Jeri, Tom’s daughter Merry, (who was providing care and driving Tom around full time now that his arm was broken) and myself. 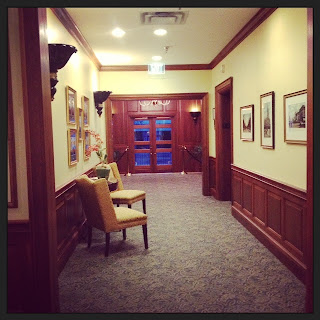 We were warmly welcomed by an administrative assistant and the funeral director on duty. Blileys is a huge funeral home with many funeral directors, one of which is actually in the building around the clock, to assist anyone who needs help. They let us know we could reach out to them anytime, day or night.

After asking what drinks each of us would prefer, we were led into a conference room with a beautiful round table and chairs around it for each of us. We took our seats along with the funeral director and his assistant and began the process of planning.

As a pastor, I’ve been a part of many funerals, and planned many services.  Aunt Jeri remarked to me, “Deanna, you’ve done this many times…”  and I said, “Yes but there’s nothing like when you’re going through it with your own family…”

I wasn’t a pastor that day.


I was just a person.

Shari asked me about doing the funeral service. I quickly let her know, I could not. She understood completely. But she wanted to ask me, in case it would have been my desire.

I know many ministers who do their own family members funerals, but I did not feel it was best for me to. Judy was gone and the funeral was an opportunity for those left behind to be ministered to in our time of grief. With the way I had such trouble choking out the words of the prayer the family asked me to pray at her bedside when she passed, I didn’t think I could handle an entire service.

Tom asked about singing and playing the piano. Although I know I would have had a hard time singing without losing my bearings, I knew I could play the piano with no problem. My fingers work to type or play even when the rest of me doesn't work so well. However, I considered this all through the day and my final decision was to not play or sing.

I've come a long way. Before therapy with Melissa I probably would have played, sang or even forced myself to try to do the funeral. But I'm different now.

My heart wanted to do nothing but “be” at the funeral. I needed to grieve and the way to do it wasn’t to have to watch the program carefully to see what I was to do next, or confer with the pastor about songs before and during the service.

I needed time to just be a human.


This human was broken hearted.


This human did not want to perform.


And my family allowed me to just be a human.
They did not expect me to perform.

I was so grateful everyone understood completely. 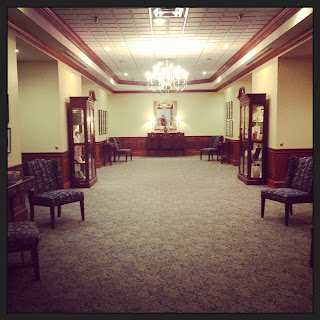 I didn’t expect to have any decision making power in Judy’s visitation or funeral. I went to Richmond to share time with her before she passed, and to be there for her funeral. But I didn’t ever assume that I would be consulted about anything. Imagine my surprise when Tom included me in everything. Of course he included my siblings as well as Aunt Jeri, who was Judy’s best friend and Merry, who was close to her as well.

We had many decisions to make – everything from the container Judy would be cremated in, to an urn or a box, the guest book, announcements, invitation, contacting a pastor, getting the order of service ready, selecting songs, providing photos for a DVD presentation, and much more.

I was overwhelmed at all the remembrances one could purchase to remember their loved one. I was amazed at all of the choices of caskets, urns, cremation boxes, and more. Did you know each family member can get their own small individual urn for approximately $35? Did you know some funeral homes do a thumb print of everyone they do a funeral for? And you can get those thumb prints on what is called a “thumbie” in gold or silver, to wear as a necklace? The funeral director reassured us we didn’t have to make a decision on any of these options now. They would all be available in the future if we changed our minds.

The funeral director would ask a question and Tom would say, “How do you feel?” to each of us. One time I said, “I am agreeable to whatever you or anyone else wants, Tom.” He said, “No, we are voting on this!” He insisted all of us have a voice.

I shared my opinion on anything he asked, with understanding for whatever anyone else desired.

On one of our breaks I had stepped out to call Larry and tell him we had decided on the day and time for the funeral and ask him to go ahead and arrange transportation. I was out of the room for a moment when they had started to work on the obituary. It was surreal to come back into the room and see they had already listed me as her firstborn, with Larry’s name in parenthesis as my husband, and our children as her grandchildren.  Together we wrote the rest of the obituary and edited it.

Judy requested to be cremated. Our brother would not be arriving until later that night, and it was very important for closure for him to see her. The funeral director let us know that one or more of us would have to come back the next day to do an official identification of Judy’s body, before cremation. We decided we would all come back and have a private family viewing at that time. They did not do a full embalming or dressing but they did what they call basic care, to make her as presentable as possible for this family only viewing.

We had the option of embalming and having an open casket viewing at the visitation, and then cremation following the funeral. This was considered, for closure for her other family and friends. However in the end we decided against it. Aunt Jeri voiced that she wasn’t sure they could make her look enough of her normal self, before the cancer had ravaged her body. We asked the funeral director for his honest thoughts. He said that admittedly, it was a challenge with those who have passed on from liver cancer. They turn such a yellow or orange color and so much make up needs to be used to make them look at all like themselves.  Judy never wore much makeup at all anyway. This solidified our decision to not have an open casket.  Everyone was in full agreement to have a private immediate family viewing and then cremation. 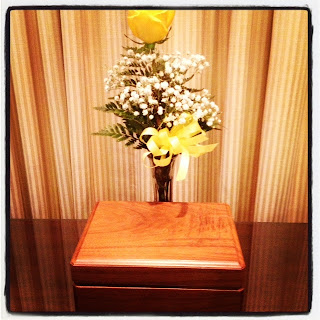 We decided on a box for the memorial table, and a single yellow rose by the box on the table. This was Tom’s frequent gift to Judy. He often brought home single yellow roses for her. Real ones, yellow candy ones, all kinds. When he asked the funeral director for the yellow rose, all of us became emotional. I was sitting at the round table between my sister and Tom and when everyone began to weep I had a hand on each of them, consoling. The staff at Bliley’s gave us time by ourselves a few times in order to talk amongst ourselves or take a break when we needed one.

I couldn’t help but think of my relationship with roses, and the fact that Savanna gave me 12 yellow roses for my birthday just a few days earlier, before I had left Tampa.

After several hours of discussion and selection and tears in between, everything was in order and we prepared to leave and get something to eat.  Although many of us had no desire to eat our stomachs were growling and heads were banging from no nourishment for so long beyond the drinks we were served at Blileys.

We agreed to meet at Olive Garden, a family favorite.

I was in the car alone with my sister, and as we were in route she stared out the windshield and numbly said, “Did we just lose our mother this morning?”

We drove to Olive Garden with tears streaming.
Posted by Dr. Deanna DossShrodes