Have you ever played hide and seek and found yourself underneath a bed?  Perhaps all of us have been there at some point in time. Laying underneath my adoptive parents bed during a childhood game, I felt a large, cold object. I pulled it out from under the bed into the light. It was a black metal fireproof box. Curious, I opened it.

Unfolding the parchment-like papers, my eyes fell upon my original name for the first time.  I knew I was adopted, but all of this was new information. Adoption and name change papers declared that the child relinquished by an unnamed woman, and given to my adoptive parents, was named Melanie Lynn Alley.

I can’t remember exactly how old I was when I found the box. I just know I was still small enough to fit underneath the bed. I couldn't lift my head but I could squeeze underneath there and hide.

I stared at the papers trying to reconcile that Melanie was Deanna and Deanna was Melanie.

My eyes darted to the birthdate.
Yes, this was me. It had to be. It was my birthday.
The relinquishment date.
The adoption date.
The name change date.
My old name.
My new name.
It was a lot to process and honestly...sometimes I'm still processing it.

Little did I realize at that moment that the black metal box held the key that I needed to find my original family.

My brother and sister had been told of my existence before reunion , but had no details of my name, date of birth or any identifying information.  They were intentionally kept in the dark.

I knew they existed, but had nothing that I could have identified them by.

In 1990, an intermediary from the adoption agency contacted my original mother to inquire about reunion. For many reasons I will not go into in this particular post, she said no.

Thus began two years of what can be described as mental torture.

It was like I had been thrown into a pool of grief. I used work to paddle around and stay afloat.

My husband and I were youth and music pastors working demanding hours. We had two babies, just a year apart -- both in diapers. "What a gift," I thought. "I can work myself into total exhaustion from sun up to sun down, to numb this pain."

The perfectionist-workaholic in me that had always used work to detach from pain now needed this excuse more than ever.  Working allowed me to push away the magnitude of my mother’s refusal to reunite. But I had to lay my head on the pillow and go to sleep sometime. And every night, I would try to not shake the bed as I cried, and awaken my sleeping husband.

I was in a deep depression.
There was no internet.
No online adoptee support.
It was the 1990's, remember?

There I was, alone in my bed, staring into the dark with hot tears streaming down my face wondering how this ever happened to me.

When I meet adoptees who have experienced the same thing, I feel their pain so deeply because I’ve been there.  I tried so hard to hold myself together during the daytime for the sake of my husband and children and also for the ministry. One day Larry was out on an errand and both my children were in their cribs napping. I was at the kitchen sink doing dishes when suddenly a wave of grief overwhelmed me and I collapsed to the floor and sobbed, begging God to help me. I became the dishrag on the floor, laying in a pile of tears, wrung out emotionally.
Two years of this charade was enough.

During the day when no one was in the sanctuary, I went to the altar, and asked God what to do. I couldn't imagine living like this any longer. In fact, some days I didn't want to go on any longer although any mention of that to anyone would have surely brought forth a slew of all the reasons I had to keep going.

I should have been sooooooooooo happy to BE ALIVE, right? That's what everyone tells adoptees..." just be grateful for life."  We are not to grieve or mourn for what we've lost, only be thankful. I had a wonderful husband, two sweet little boys, and we were changing lives daily in the ministry. So why did I want to jump off a bridge?

Kneeling at the altar, God spoke into my spirit and said: “Why have you quit? Did your mother's voice tell you no? Did she turn you away, personally? Until you hear it with her own voice, do not believe it. She said no to someone who is a stranger to you both, an intermediary.  You deserve more than a go-between. Furthermore, I did not tell you no. So keep going!"

Things were different from that day forward. Once I get a word from God, it's all over but the shouting! Seriously.

I started searching for them every moment I wasn't feeding and changing babies, fulfilling the duties of pastoring or taking care of my totally sexy husband. :)  All I had to go on was my original name, and it helped lead me back to where I started. It's a long story for another day, but searching for dead relatives, utilizing my original name, I found living ones. :)

Before I go on, let me share a few things I believe are important for every person on the planet:

1) I believe every human being has a right to know the names of the mother and father they come from.

2)  I believe every human being has a right to see their original mother, father, and siblings at least once in their lifetime whether it be in person or in a photo. This is is very important for genetic mirroring purposes if nothing else.

Until you lay eyes on the people you come from, your mind races to try to imagine them. You've never met anyone who looks like you before. And, it’s a heavier weight than anyone can describe when you have no frame of reference.  You keep conjuring and conjuring until it nearly drives you out of your mind. Well, it has literally driven some people out of their minds. But few people seem  to want to talk about that. Until they kill themselves, and then we blame it on drugs, alcohol, untreated depression and yada yada yada. Never relinquishment or adoption.

3) I believe knowledge is different than relationship. Every adoptee deserves to have knowledge of where and who they come from, and a visual image. Relationship is a separate issue.

I never believed it was my “right” to have any certain level of  relationship with my original parents or siblings. But I do believe I have the right to inquire personally of each person in the family about the possibility of reunion and relationship and receive their  answer directly.

4) I believe related human beings have a right to speak to one another freely.  A parent and offspring should not have to talk through an intermediary. And parents should not mediate between adult siblings. Let flesh and blood talk without restraint.

When searching for my sister, mother and brother my goal was to receive THREE answers, not one -- for each had the right to answer for themselves independently as to whether they wanted a relationship with me.

Some people may not realize the importance of this, but the fact is -- even if a parent refuses contact -- adult siblings should still be able to make a decision independently of the parent.

I wanted to look my mother in the face at least one time and have an image to remember. I knew there was a very good chance she would say no to a relationship. For that reason, I didn’t make a phone call. I drove ten hours and knocked on her door. Yes. I. Am. Serious.  My husband hasn’t called me “Sassy” for 27 years for nothing…

My mother didn’t slam the door. She invited me in.
I don’t think my knees have ever shaken so hard in my life.
My God, did they shake.

I gave her a choice, to see me again, or to never see me or hear from me again. And I meant it. Had she told me no to my face I would have accepted it. And, I would also give my brother and sister that same choice independently.

I’ve told the story of the bond I share with my sister, but never blogged about my brother.

My brother is Charlie.

On the day I found him, he went out to the Hallmark store, trying to find a card that would reflect his feelings. Unfortunately for him, they don’t sell “Your-original-sister-found-you-years-after-being-turned-away-by-your-mother-after-a-botched-confidential-intermediary-situation cards.  Nope, they don’t sell those.  What the heck is wrong with you, Hallmark?

He came home without a card, sat down and started to create one at his computer .

I received his specially designed card in the mail a few days later. With tears streaming down my face, I read his words:

Took you long enough to find me, didn’t it?


He tells me he’s complicated, yet my brother is one of the simplest people to figure out that I have ever met. I have no trouble understanding him.

Because love needs no explanation.

Love is what it does.

Charlie and I don't have the commonality of our faith. He is not a believer. I think the times he has stepped into church as an adult have probably only included the times he’s visited our home. When he has stayed with us over a Sunday, he goes, out of respect to us.

He also got married in a church. He asked me to be in the wedding, and asked Larry to do the ceremony.  He gave me a bracelet engraved with my name on it, that day. I keep it in my jewelry box. I don’t wear it a lot because I don’t want anything to happen to it. I know that might sound kind of silly. It’s a bracelet, designed to be worn, yet I want it to remain just as it is.

One of my favorite parts of the day was dancing with him for a few minutes at the reception, but the most humorous memory was his dance with my husband. 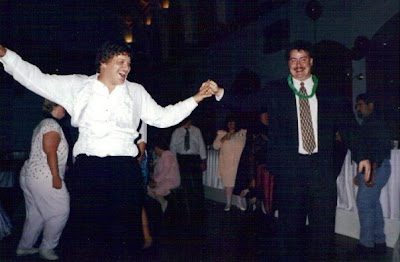 We are both musicians.

He’s a deep thinker -- loves conversations beneath the surface just like I do.

He shares my love for animals.
He recently sent me a note out of the blue, that simply said:

I know that I am a complicated person. But when all is said and done, just know that I LOVE YOU.

Love is what it does.

And I understand it perfectly.