Being directionally challenged is one of my weaknesses. I’ve gotten lost going to places I’ve been a zillion times. One morning many years ago, I got lost driving our boys to school in a town we lived in for 10 years. They could hardly believe it and haven’t let me live that one down!

This extreme weakness of mine will give an explanation for the following revelation about my natural mother...something that will seem impossible to many. You will wonder how I could be possibly be unaware of what I’m about to share. Thus, the reason for me telling you that I can't find my way out of a paper bag on some days.

Years before I found my natural mother, Judy, I had met with the agency who handled my adoption. I had an in-person meeting for non-identifying information as well as to discuss being part of their reunion program.  After that didn’t work out, I searched for her myself and found her.

I haven’t been to the agency in over 20 years.

Last week my sister and I got up early to drop our brother off at the bus station to head back to his home in North Carolina. As we were leaving the station I said, “Shari, would you be interested in seeing the last place Mom saw me, in 1966, before our reunion in 1993? We don’t have to go there if it would difficult for you but I was just thinking, maybe you would like to see it with me."

I put the address of the agency in the GPS and we headed off towards it. It's in sort of in a weird spot -- a large building on the corner, with  homes surrounding it on the left, and across the street.

As we pulled into the neighborhood, my sister was absolutely stunned and said, “OH. MY. GOSH. DEANNA…………”

“Don’t you know where we are?”

My mother was physically fit, especially the last five years of her life.
She walked.

She lived right in the neighborhood with the agency for all these years. How the heck did I miss that?

When my sister shared this revelation I literally burst into tears right there.

“She loved you, Deanna. She always wanted you close to her... always…” Shari said. “She couldn’t have lived in this neighborhood all these years if she didn’t feel that way. This helped her feel close to you.” 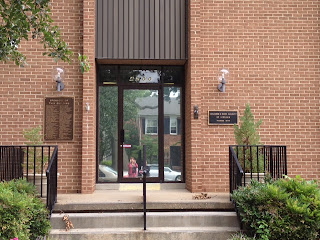 I melted right there on the sidewalk. My sister and I walked arm in arm down the path, and stood in the front for a long time. We took pictures.

We both stood there in tears, overwhelmed that our mother's house was right in the same neighborhood all this time, and we didn’t even know it.

This was just one startling revelation of my mother’s thoughts toward me. Things I had no idea of until she passed away.

I continue to find out things that dumbfound me.

As I’ve shared before, she did not converse on a deep level. Never would she have said, “Deanna, the adoption agency, the last place I held you back in 1966 is in the same neighborhood and I often think of…”

No. Never.
She would have never expressed that.
Would have never even brought it up.
It wasn’t her way.
She was so secretive.
And it would have brought up opportunity for even more questions.
Things she didn't want to answer.

But I am finding out more and more all the time, she loved me fiercely.
She didn’t always know how to speak it.
She was afraid. So afraid.

She could not bring herself to open up and share my father’s name.

And she also never shared that the last place she held me, was in her neighborhood all this time.

And she wanted it that way.
Or she would have moved.
But she didn’t just want to just leave the neighborhood and move on.
Because  she couldn’t.

That was where she lived until she died.
Within walking distance of the same place she relinquished me in 1966.

Nobody has a baby and just forgets or has the “new start” agencies or even well meaning people are so famous for telling them about.

You are changed forever after having a baby.
There is no going back to the way things were.
No forgetting.
No "moving on."
No "new start" as if it never happened, as the agencies so often promise.

And you are not simply a “birth mother” as most of the world is so fond of saying.

Growing up and well into my forties, I referred to her as my birth mother.

I didn't know any better.

It was what society referred to her as, what I was always conditioned by the world around me to refer to her as.

But then I listened. I learned. I became aware.

Nobody is a birth mother. They are just a mother.

Now that I understand otherwise about this term and particularly how hurtful it is to many mothers of loss to adoption, I use different terminology. For a fuller understanding of why I don’t refer to Judy as my “birth mother," find some great insight from first moms here and here, that explains it well.

God never created any woman simply for the function of giving birth.
And the bottom line is, when she does give birth, she is a mother, not an incubator.