Adoptees: In Position For Healing!

First, for anyone who is doubtful, let's establish why healing is needed in the first place.
You can find links with a lot of information about post-adoption issues on my blog's resource page,   but today I'm going to share a part of a conversation that was on a private Facebook discussion with the Lost Daughters bloggers. I am doing so with the permission of the two writers involved, Julie Kelly and Rebecca Hawkes. (Two women I am abso-freakin-lutely crazy about.)

Julie Kelly: Adoption is not a one-time event. It is a lifelong experience. We will never be UN-adopted. Being an adoptee will forever color the way we see the world and events. Yes, adoption has a legal start date. Just like I was married 27 years ago, and I'm STILL married.

Rebecca Hawkes: What? Julie, are you telling me that you STILL haven't gotten over being married? What is wrong with you!?

Julie Kelly: I think adoptive parents tend to look at adoption more as a legal event that added a child to their family and that it's all over now after the judge signs the papers and they get the child home. That's adoption to them - going through the hoops to obtain a child and then finally getting one. For us, it's only just the beginning of the adoption experience. It literally never ends.

I agree with Julie and Rebecca.

An adoptee processes how their adoption impacts their life, throughout their life.

To proclaim: "they're over it!" is not only naive, but inaccurate.
Is the adoptee still alive?
Then they are still processing their life events.

With that said, does this mean an adoptee can't experience healing?


No. It simply means their healing journey is just that -- a journey.

There is trauma (a primal wound) and the loss of one's entire first family that is involved in adoption.   It really is a death of sorts.  If someone encounters significant loss in other areas of life we readily acknowledge the need to grieve. We don't expect things to be the same as they were before, or as if it had never occurred.  Resources are provided to help those who are impacted, and space and time to process is a given.

The same type of compassion is typically not extended to adoptees, as many people simply can't grasp the loss we experience. (And many don't want to even try. It messes with the paradigm they have embraced all their lives and are reluctant to let go of.) When parents lose a child to an accident or illness it's common to hear them say, "we are healing after the loss of our child, but things will never be the same." A major problem that I see in the way people (particularly non-adoptees) view healing for post-adoption issues is that they believe healing means, "life as if the person was never adopted." And quite frankly, that is not possible. An adopted person will always be adopted, whether they are 2 or 62.

Although adoption never ends, God is God. And when we come to Him with any need in our lives, He responds. The short answer is that God can heal anything. And, we must put ourselves in position for Him to do so.

This does not mean that the healing is instantaneous, particularly when it comes to issues of grief. Would you instantaneously heal if your child died? What happens when a child dies and two years later someone asks the parents, "So, do you feel like you're over it yet?" This question is brazen, even inappropriate. And, it's one I have actually heard. Parent in such situations often say something like: "We'll never really be 'over it' however it does get better day by day. We are on a path to healing."

Why is that when adoptees give that same answer, it is so hard for those not adopted to accept? 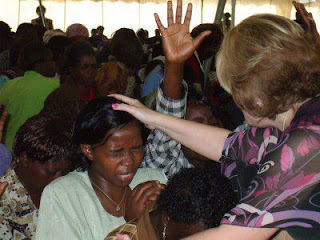 Some people may wonder how I went so many years without moving forward more in my healing process for post adoption issues, especially as a minister. In my case, I not only pastor a church but I travel and speak at conferences. I've preached and prayed for people all over the world, from America, to Africa, to Ecuador. Many times they've been instantly, physically healed. I believe in divine healing and I've witnessed it with my own eyes! Yet where was this victory in my life?

To be frank, it was kind of embarrassing.

I was empowered in many areas. Why not this one? People in the church we pastor lovingly call me, "Wonder Woman", yet on the subject of post-adoption issues,  all I wondered was why I still hurt in some areas.

Why was my healing process stagnant, and what did I do about it?

The following is my personal experience.  (I share this with respect for the path that others have taken toward healing.)

For me, I came to the realization that I needed three things, in combination. A triple-braided cord, as scripture speaks of:

God is always there. He's just waiting. The Bible says, "draw near to me, and I will draw near to you." (James 4:8) So if we draw near, there He is. This aspect, I knew about.

I've turned to God throughout my life but to be honest, there were other times, I didn't show up. I either just didn't take time, or I flat out refused and ran from what He was trying to do in me. Sometimes even ministers aren't obedient or responsive to God.

So, He was always there. I was sometimes absent.
To experience healing, one of us couldn't be absent. I needed to draw near.

So, I got better at that. For a long time.

One night in October of 2011, I was triggered, and went through a tough time emotionally. This led me to seek out resources for adoptees. I stumbled upon The Declassified Adoptee and Lost Daughters. For six months I just read what others were sharing.  I didn't write on adoption or contribute, I just listened. That soaking time was important.

I thought I merely stumbled upon these resources but truth be told they were a gift from God.

The third component that I realized I was missing was community.

God designed us for community. We are not made to go it alone.

I understood this truth regarding a church family. Often people have asked me, "Do I have to go to church to be a Christian?" Well, technically no. You can have a relationship with God and not be part of a church family. But (and this is a very big but!) it's almost impossible to live a victorious Christian life.

The Bible says that those who are planted in the courts of the Lord will flourish. (Psalm 92:13)  I often see believers who are not flourishing, struggling along in their spiritual walk, without a significant breakthrough. Upon reflection I realize they are most often the ones who are absent from fellowship and encouragement. God has always chosen to do things through community. Advancement comes through working as a team. Even when Jesus sent the disciples out, how did He do it? Two by two. Nobody went out alone.


Duh! How did I miss this regarding my struggles as an adoptee?

"A person standing alone can be attacked and defeated, but two can stand back-to-back and conquer. Three are even better, for a triple-braided cord is not easily broken." Ecclesiastes 4:12 (NLT)

All these years I had been living with my issues much like a Christian who tries to live for Christ but does so alone at home and just can't get the traction they need to make significant, lasting progress. I tried to handle the pain, just between God and me, but He wanted me to reach out and experience the power of the community He provided. Surrounded by an army of adoptees, I could conquer. There is strength in numbers!

Just like believers need a church family to flourish, so adoptees can flourish when they connect with other adoptees in community.

Why adoptees versus just connecting with people in general? Because rare is the person who understands everything I just said above, unless they are adopted. Adoption from the adoptee point of view kind of defies explanation to those who aren't adopted.

As I continue showing up to meet with God, and with my adoptee family, the significant progress I desired for so long has finally happened. And I get stronger every day.

NOT A ONE SHOT DEAL

We can experience healing in one area of our post-adoption issues, but  it doesn't mean we'll never experience a trigger in that area or another, and feel the need to ask for support or prayer, or additional therapy.

(It is of note that I did have professional counseling, along the journey. That's a whole other blog post!) But I did not break through until I connected with adoptees.

So, my friends, when you feel triggered and reach out, it doesn't mean you are weak.
It means you realize where your strength comes from.

Yes, divine instantaneous healing does exist.
In other cases, perhaps  even most cases, people are healed along the way.
Scripture records this as in the case of the lepers. (Luke 17:12-14) The Bible says that "as they went" they were healed. This means, along the way, they were healed, as opposed to instantly.

Healing for the adoptee is a journey, not an event.

No matter what, do not lose hope.
Get in position to heal, and celebrate every victory along the way.

The best way to celebrate? In community.

Parties are really boring when you have them all by yourself.
Posted by Dr. Deanna DossShrodes