Why Do Some Adoptees Want To Search For a Bio Parent Who Was Never There?

Upon announcing my public search for Mr. Greek (my natural father) on the Adoptee Restoration Facebook page, this comment appeared: 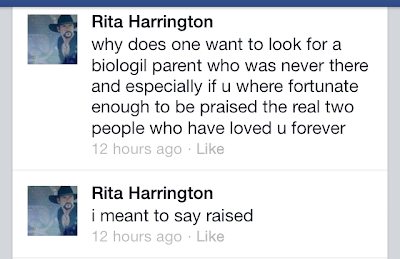 Please don't think I'm picking on Rita. For all I know, Rita and I would have coffee and go shoe shopping together if we lived in the same city.

I have shared Rita's comment here as an illustration, because Rita is not alone in her feelings.

Rita is one of untold numbers of people who feel the same way she does. They don't always share it in the same exact words, but the gist of this comment is one that is repeated millions of times. If you are an adoptee, you've probably heard it.

That a biological parent was, "never there," nor wanted to be.

Millions of mothers, particularly in the era that I was relinquished (the Baby Scoop Era)  did not want to give up their babies, and were in fact, forced.)  Many of them wanted to be there for their children, and were not allowed to be.

As for my natural mother, she became homeless after becoming pregnant with me. She was kicked out of her home by her father and became jobless, with no where to go. Shortly thereafter, she was taken to the Florence Crittenton Maternity home to hide for nine months. During her pregnancy she was treated like a leper, as were millions of girls and women at that time. Judy described the time she was pregnant with me as, "a living hell."

Millions of girls and women were told they couldn't be there for their babies and furthermore, shouldn't be there.   They were informed that they were unfit because they were not married. It was expected of them to "redeem" the situation by giving their baby to a childless couple, in need of "a gift." They were told this was their ticket to a "new start."  (The promised "new start" wasn't what they expected. You are never the same once you have a baby. And you are always a mother, even if your child is not with you.)

There are scores of mothers, particular from the BSE, who did want to be there, have thought of their child daily, and long to be reunited.

That the adoptee was, "fortunate enough to be raised by the two people that raised them."

Rita doesn't know my adoptive parents. [And this post is not about them.]

Rita doesn’t know  the adoptive parents of the adoptees she is addressing with her comment.

She doesn't know if anyone's parents were good or bad.

She doesn't know if the adoptee was fortunate or unfortunate.

Just because you're adopted doesn't mean you're fortunate.

Some adoptees are fortunate, some aren't.


For all she knows, the adoptees could have been flogged, hung upside down and forced to listen to The Greatest Hits of the Osmond Family for hours on end.

The adoptees Rita addresses in her comment may have been placed in abusive or at best, dysfunctional, homes.

This is not rare.

Talking about "what the agencies missed when doing the home studies," is a popular topic on the adoptee forums I visit. A common cry I hear among adoptees is, "What in the world was the agency thinking when they approved my parents?"

Please don't assume anything about adopted children, or adopted adults.


Some other pointers along these lines:

That the adoptee is "raised by two people who have loved them forever.”

Being desired is not the same thing as being loved.  I desire a brownie, I do not unconditionally love it.

Some people crave parenthood. They are in love with an idea but not necessarily a person.

The relationship some adoptive parents have with their child is a twisted one in which the adoptee fulfills more of a parental role, managing the parent's feelings.

Unfortunately this is also common. I see this same story repeated on adoptee forums daily.

I realize all adoptive parents are NOT like this. I am bringing to light the fact, however, that more people deal with these issues than anyone realizes.

For all I know, Rita may be an adoptee. Many adoptees who do not seem to struggle have come to a conclusion that adoption is  perfect the way it is. They get angry that those of us who speak out for reform see things differently. Basically their take is: “How dare you come to a different conclusion than me, about adoption??!!”

I was approached by an adoptee who said, "Deanna, being adopted makes me happy.  I think adoption is beautiful and I see no need for reform. Do you have a problem with me?"

My answer: "No. You have a right to your own story and your own feelings and beliefs. And you have a right to share them. I don't expect you to change or silence your views, and ask that you extend the same respect to me."
If you’re not adopted, no matter how strong your connections to adoption otherwise might be – take heed to the fact that assuming is not a good thing.

And finally, the crux of the matter...

Responses like Rita's are problematic at their core, because they have nothing to do with the real issue which is, equal rights.

Having our original birth certificates, knowing the two people we originally come from, and possibly pursuing reunion has absolutely nothing to do with whether the adoptee comes from a positive or negative adoptive home.

Knowing the truth of our history has everything to do with it being our birthright to know who and where we come from. In keeping with that, this was my response to Rita: 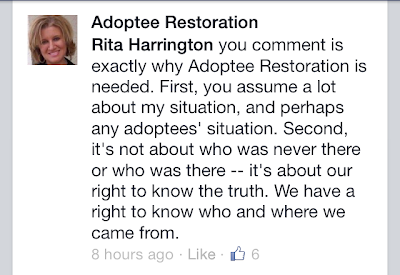