Steve Jobs and Post-Adoption Pain
(It's SO Obvious, People!!)

Countless graphics have crossed my Facebook page lauding the fact that Steve Jobs was a history maker, and adopted. 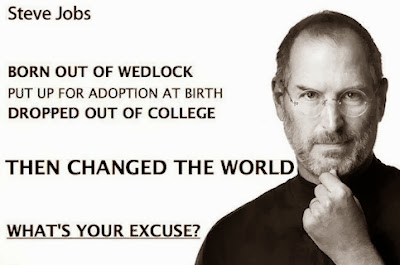 Last week I finally got around to watching the movie, Jobs.   I was tied up with work projects when the movie came out and couldn’t get to it. All this time it’s been on my mind to get it at Redbox and the other night my husband finally brought it home for us to watch.

One thought kept coming to my mind the whole movie.

How come I haven't heard even one person comment on the obvious?

The movie is one humongous post adoption issue screaming in your face!!


I am bewildered that more people don’t consider this part of his life or talk about it from the standpoint of his obvious suffering.

I tried, really…I did.

I know everything isn't about adoption, BUT --for the love of everything green and growing, it’s just impossible to separate this man from all of his GLARING post-adoption issues. And they are seriously G-L-aring!!

In the beginning of the movie there is a scene where Jobs is laying on the grass staring into the sun, tripping out on acid with his girlfriend. He starts crying and she turns to him to comfort and asks if he’s thinking about his birthmother. But I'm sure this was nothing related to post-adoption pain.

It is reported that at one point, Jobs dabbled briefly in what is known as primal scream therapy, encouraging his girlfriend to try it.Why was Jobs investigating primal scream therapy or recommending it to anybody? I'm sure this also had nothing to do with post-adoption issues. Lots of people toy around with primal screaming.

Anyone thinking clearly can see how adoption issues played a huge part in Jobs actions that were documented by countless people. I’m referring to the obvious psychological torment he lived in and the way he acted out, negatively impacting many around him as he created the phenomenal inventions he is so famous for.

The biography Steve Jobs, (written by Walter Isaacson, who was hand-picked by Jobs to write the book), says:

"The trail that Jobs traveled to the top is littered with wounded people, many of them the people closest to him, and the book seeks to answer the question of what motivated Jobs to be both brilliant and bullying."

When people die, especially ones like Jobs, we immortalize them, preferring to remember only the good – things like the fact that he is responsible for many of the gadgets that make our lives easier.  I love all of that too. But truth be told, the man who created all this was in excruciating pain -- and not just from pancreatic cancer.

Although none of us are privy to Jobs medical records, we can be certain the emotional wounds he carried also affected his physical condition, to a degree. It is a proven fact that stress does have an impact on cancer.

In retrospect it is evident that Steve Jobs never recovered from a wound that occurred before he could speak or create.

Many people at Apple and his family and friends paid for the fact that he remained unhealed for the duration of his life.

"Big deal. We have iPads now..." is what a lot of people may think.


This was a man who was so desperately hurting.

Steve Jobs needed help.
And he never got it.