Adult Adoptees: We Are The Grown Ups Now

I was once again reminded of the fact that had I not pressed forward after my natural mother’s initial refusal to reunite, I would not know two of my three siblings. (I have two natural siblings that I met in reunion in 1993 - a brother and sister, and one adopted sister that I grew up with.)

As many of you who regularly read this blog already know, my natural mother initially said no to reunion -- through an intermediary. Two years later, I showed up on her doorstep to give her opportunity to accept me or reject me, with no one in between us. I thought two adults deserved the chance to talk to one another unhindered. She made the decision to reunite once she met me personally.(The story will be released as a book, later this year.)

I got the feeling right up to her death last year, that my natural mom felt she should be in charge. Enter Deanna, who was born in charge. Comin’ out of the womb with a briefcase in one hand and a microphone in the other. At least, that’s what my good friends say. 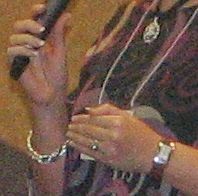 Needless to say this was an oil and water mix at times. Two women who both thought they were in charge. And one who thought the other woman was still a baby! Add to that an adoptive mom who thought she should be in charge at times because, "I'm the one who raised you!" and ka-BOOM! Call a SWAT Team, now. Adoption bombs raining down...


Who should be in charge in reunion? 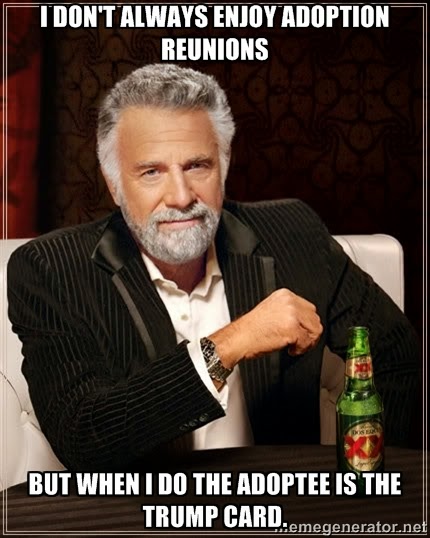 Laura Dennis encourages adoptees to take charge in their reunion – to be the “Trump Card.”

Consider the fact that the adoptee is the one who actually is adopted.

And, we were the utterly powerless ones for at least eighteen years. Probably more. We have some catching up to do.

For those who believe in what is known as “the triad” all I will say is, it wasn’t (and still isn't) equal on all sides. There is much more power on the first mom and adoptive parent side.  This loss of power that the adoptee must live with for the first couple decades of their life may be one reason why so many adoptees have control issues. Don't mind me, I just perfectly align salt and pepper shakers on tables and adjust wall hangings wherever I go.

The adoptee and other family members have a right to connect (father, siblings, aunts, uncles, cousins, grandparents, etc.) even if a natural mother says no to reunion. There are relationships at stake in the adoptee’s life other than the one they have with the natural mother although that seems by and large the greatest relationship disconnect adoptees struggle with. An adoptee may desire to give other family members an opportunity for relationship, even if his or her first mother refuses reunion. And I know…this TOTALLY freaks many first moms out. (“What do you mean you are going to contact the rest of the family to ask if they want a relationship with you after I said no? I made this decision for us! I am in charge...what don't you get about this?!”)

Once we were well into reunion, I told my first mom that if she had said no to me when I came to the door in 1993, I wouldn't have approached her again. However, being that my brother and sister were adults at the time, I would have contacted them separately and given them opportunity to make their own decision about a relationship with me.  Her reaction to that may rival a Tsunami. The attitude was, “No…you wouldn't have had a right to approach your brother and sister!! I’m the mom! It would have been my place to make the decision for all of you."  Although all three of us siblings were adults in 1993, she felt it was her decision, exclusively. Before she passed away she reminded me (and I quote) "It is only through the grace of God and my choice to give you life that you truly do exist. You have all this, because of me."  Hold me back, dear sweet Lord, baby Jesus. Oops, sorry Jesus. You're not a baby anymore either...

I noticed it didn’t matter how old I was…whether 27 or 47, she would always relate to me as the baby she relinquished in 1966 -- not an empowered, grown woman.

In July she told me she was certain I have "many brothers and sisters" from my natural father's side. Yet, she believed I had no right to them, or to him.  In addition to my three siblings I am aware of, there are possibly many more I don't know. And maybe never will.

I realize I’m probably going to get a lot of first-mom-mail in response to this post saying, “Deanna, of course she wanted to be in charge. That’s because her rights were taken away too. It was how it was in the Baby Scoop Era. She didn’t have a choice. Others made decisions for her and she lost all her power. She was just taking her power back…”

And yet, I am an adult.
We adult adoptees are the grown ups, now.

For us, it’s enlightening.
For them, it’s frightening.

And yet, not a reason for us to back down.
Others were the decision makers, then.

It's our move, now.
Posted by Deanna Doss Shrodes