Can You Be Adopted AND (Happily) Married? 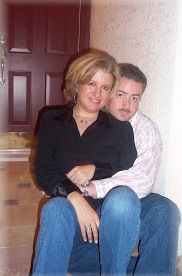 Mail is landing in my inbox from adoptees asking me if I'll write on the subject of how being an adoptee can affect one's marriage. And specifically, how to make marriage work if you are an adoptee, or married to one. If you have no idea why this would be necessary to talk about, all I have to say is, do not put your high beams on.

I've tried to figure out why people are asking me to write about this and I have come to the conclusion:

A lot of adoptees that I know personally do seem to have a struggle with marriage or romantic relationships. Then again, marriage is not easy to begin with!

Some have said they are on second and third marriages (or beyond) and others have given up completely.

People notice I've been married 25 years and think I must know something.

I didn't jump on this topic suggestion right away. Part of my hesitancy was that I have to live this out every day. And, some days I fail. My husband and I are a work in progress. But we do know how to persevere in arduous times . With that said, join me this week as we talk about adoptee marriage issues! **Happy Dance**

When Larry and I speak at marriage conferences, he always starts by saying, "My wife and I have been happily married for 23 wonderful years! That's not bad for 25 years altogether..."


We've had some really difficult days. Even difficult years.  It got a lot better after he learned he should never, EVER ask me, "Who's your daddy?" in the heat of the moment.  I always wonder why people ask us to come speak about marriage and I've come to the realization that we're honest about our struggles and how God has helped us through some really complicated situations where we almost murdered each other times.

We live in a world where most people are not adopted. When anyone has lived a life experience that is significantly different than the rest of the population, and particularly significant loss, you better believe it will affect your marriage. I am not saying that all or even most of our marital troubles have been due to post-adoption issues. Some of it is his need for exclusive control over the TV and the temperature in the room. But some of them are directly related to my being an adoptee, and we could not ignore them if we were going to last.

Larry always knew that I am adopted and he knew from the very beginning about my desire to reunite. I wasn't out of the fog when we met, but I knew enough to realize that something inside me wouldn't settle down until reunion. He wasn't clueless going in to the marriage that there was a deep longing in my heart to know my entire history, but neither he nor I realized how much all of this would impact us as a couple.

When we met, I had a lot of post adoption struggles, but I didn't know that's what they were. I just thought I was a control freak they were weaknesses, habits, quirks and idiosyncrasies -- but no idea what the root was. One of my problems was my severe nail biting, which Larry helped me conquer for our engagement. He loved me with all his heart but was hoping he wouldn't have to put a diamond ring on a bitten down, bloody finger. I thought I was powerless to accomplish this, but he said,"let's work on this, together."


After a year and a half, the problem was conquered. Lots of people who come to my home remark about the rubber gloves I always wear when I wash dishes or clean. I protect my hands as much as possible, taking care to make sure my nails always look nice. Whenever people ask my husband what his favorite physical feature is about me, he proudly says, "Her hands. My wife's hands are so beautiful." He loves holding my hand, or when I reach out to touch him. That never gets old! He likes other things too but he always mentions my hands first. I am so proud of myself for overcoming the problem I struggled with so terribly every day for 19 years.

We got engaged and then prepared for marriage and the first issue that surfaced had to do with our honeymoon. We were getting married in my hometown (Baltimore, Maryland) and were going to be staying at a local hotel on our wedding night. The morning after the wedding we were going to fly to our 8-day honeymoon  destination. The only problem was, I had no idea where we were going!  Larry's uncle, who he had been close to since childhood, gave us an amazing wedding gift which was -- a honeymoon to an exotic locale! One catch... he said it had to be a surprise.

Many of you adoptees know exactllllly where this is headed. [sigh] This surprise sent me into an emotional tailspin. (As a young adult, I was still in the fog and didn't know where it was coming from. I found out in my thirties. Many articles/research about this can be readily found . My friend Laura Dennis recently wrote a fantastic post about this issue.)

For months I eagerly anticipated the wedding but was nervous about the honeymoon. People would ask, "Why dear? What' wrong? We can get you some books to prepare for 'the big night' to fix all that..."  Um...no. That wasn't the problem.  One more day of waiting to have sex with this hunk of burnin' love, and I may have exploded all over the city of Baltimore...maybe even Baltimore County. Okay, maybe even the USA. What scared me wasn't intimacy...it was that I had no idea where we were going, and I couldn't handle it. I even spent sleepless nights, tossing and turning about it.

Larry was puzzled. Why was his fiance not overjoyed at the promise of a luxurious surprise honeymoon?

I couldn't articulate why. 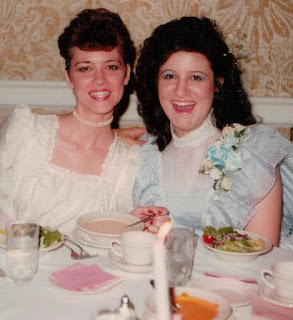 My best friend from college, my maid-of-honor, Joanne (Hi Joie, I know you're reading!) said, "Deanna, what's wrong? You've been given this amazing surprise. Why are you unable to just go with it, and enjoy it?" She asked this not in criticism but sincerely trying to understand. I was powerless to explain to her why this was driving me to the point of severe anxiety.

Joanne said, "What do you want for the honeymoon, Deanna? If you could have anything, what would it be?" I said, "Honestly? I would be happier with my new husband at the Super 8 in Baltimore for a week, knowing where I was, than being in the most beautiful locale in the world as a surprise..."

My a-mom didn't know why I was scared either but she could see it was sucking all the joy out of my wedding. All I could do was sit around wringing my hands about the honeymoon, instead of rejoicing in the fact that I was getting ready to marry the love of my life.

I always wanted to get married.
I dreamed of this day my whole life.
And there I was, melting down because of a surprise.

So a week before the wedding, my a-mom and I were sitting in the living room with my wedding coordinator, Susan Hobbs. Susan was trying to go over some details for the ceremony and I just kept going back to saying things about the honeymoon and worrying about it.  I couldn't focus, at all. Susan was talking about aisle runners and pew bows and candle sticks and I was talking incessantly about my fears about the surprise.

Finally my a-mom took authority over the whole thing and said, "That's it! I'm putting an end to this."

She got up from her chair, walked over to the phone in the dining room, picked it up and called Larry's uncle.

I remember the entire conversation. She said:

"Hello, Mr. Shrodes? This is Mrs. Doss, Deanna's mother. I need to talk to you for a moment.  I realize I may be stepping where angels fear to trod, but I need to ask you where you are sending Larry and Deanna on their honeymoon. My daughter is experiencing a lot of anxiety and she simply cannot handle this, particularly on the week of the wedding. Can you please help us, and tell us where you will be sending them? Okay, thank you. Thank you so much. We really appreciate your help." And she hung up.

She turned around and said, "Deanna, you and Larry are going to Hawaii."

I didn't scream and shout with delight.
I took a deep breath, sunk back on the couch in utter relief and said, "Thank you. Thank you so much."

A part of me felt terrible to ruin the surprise.

But, I needed to know.
I had to know.
I was so grateful for what my a-mom did in that moment.

Because a wedding day should be happy and a honeymoon shouldn't be something to fear.

It was only in knowing that I could emotionally breathe and enjoy the rest of my pre-wedding week, and my wedding day. And the totally amazingness that having a sleepover every night with this man is. 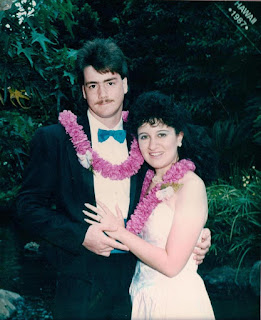 It was only the beginning. My new husband soon found out, some post-adoption issues would affect us for years to come.

We've learned a lot about addressing these in our marriage, so we could succeed. And, as a matter of fact as I write this post today, we are going to a whole new level in our relationship yet again. The story is still being written, and half of the battle of any problem is identifying what it is.

We found help and hope. You can too.

In my next post, I'm going to talk about how we navigated the issue of surprises in our marriage. I'm married to someone who is crazy about surprises! He looooooves giving them even more than receiving them. This caused HUGE problems in the beginning.  How did we arrive at a solution that enabled him to fulfill his desire to surprise and be surprised, while also honoring my needs? Come back and find out.

You can be an adoptee, and successfully married at the same time. I promise.