Adoptees & Dogs...
Why They Make a Great Combination

"The more I know about people, the better I like my dog."

Clearly the world is crazy about dogs. Well, the normal people are, anyway.  And, the adoration is deserved. 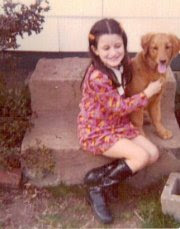 When I was a little girl I had a dog named Kelly, a golden retriever. This is one of my favorite photos of us together, and friends who have seen this photo have remarked that my "style" is still the same. I have boots I wear, exactly like this, still today. And plenty of dresses just like that one in my closet that I wear now. I just don't let them hike that high up on my thighs today. Nobody wants to see that much cellulite.

Kelly has long gone on to be with Jesus, but now I have two huge but gentle dog-a-sauruses named Max and Maddie. 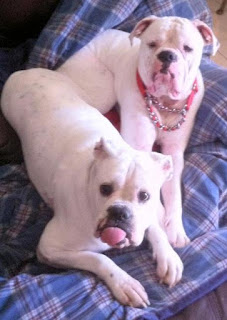 Many people whether adopted or not speak of a very special relationship with their dogs. The strength of character dogs display is particularly appreciated by me, as an adoptee who has a long track record of problems trusting human beings. And not for nothing, I might add! 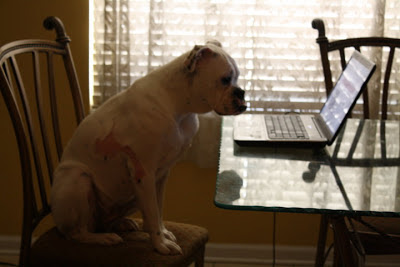 Max and Maddie sit or lie right beside me while I write at home.  It concerns me to be away from them for very long. Sometimes I'll decline an invitation if it means being away for longer than I know they can emotionally handle.

Max has terrible separation anxiety and picks at the top of his head and ears if we are gone longer than a few hours. A few weeks ago he had a meltdown when I went out to work in the yard for an hour. For some reason he became convinced I may not come back. I entered the house after weeding only to find that he completely torn the top of his head up, and a bloody mess remained that required binding his wounds and cleaning up. 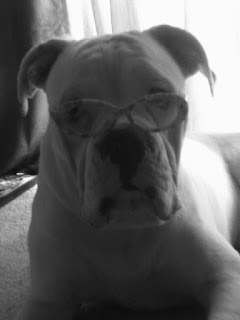 I understand his  anxiety. As a child, I was so anxious I bit my nails down to the quick -- many times until they bled, every single day, all of my life through young adulthood. My husband helped me to break free of that.  I also wet the bed most every night until at least first or second grade. I still remember the steps my loving a-grandmother took to help me get beyond that issue. And then, there's the foot shuffle as well as an eating disorder. I had many post-adoption issues throughout life that were simply not recognized as such.

I understand abandonment and separation anxiety issues.  I'm always sensitive in watching out for Max and avoiding triggers whenever possible. Some may think I'm crazy for thinking this, but in trying to figure Max out, I have often had the thought, "Max doesn't live with his mother, he lives with me. Could this be why he tears his head up?" 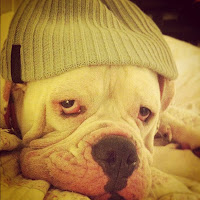 Some may think it's ludicrous that I bring an 85 pound dog into my bed when he's scared (or sometimes even when he's not) amidst storms or the sound of fireworks or just nights where he doesn't want to be alone. But I understand this gentle giant. I am also super glad wetting the bed isn't his issue.

I can trust God, and dogs. People, not so much.

A lot of people have told me throughout the course of life that they had "my best interest in mind" when really it had little to do with me and everything to do with them.

There's a reason dogs are called "man's best friend". (I like to think they are women's best friend too.)  They would lay their life down for you. They really DO have your best interest in mind.

There is no guile in dogs. Not an ounce.

They love so purely and unconditionally. 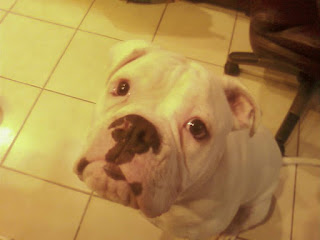 They hate to see me in pain, and they'd do whatever is within their power to see the pain leave. When I cry, Max runs around the room, in absolute despair. He wants desperately for whatever is wrong to be fixed and until it is, he doesn’t rest.   He runs throughout the house as if to say, “People! Listen up! Something’s wrong, and it needs to be fixed, NOW! Now, I tell you!” For this reason I sometimes leave the room when I cry because I know it just puts Max in such a state of frenzy. When he can't fix what's wrong, it's so awful for him. 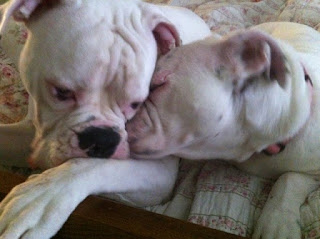 There is no pretension in these creatures. No cover-ups. Just reality.

I realize, some situations are healthier than others. In my particular adoption triad, I am the only member who lives completely open, with no secrets. Over the years that has been a crushing weight at times.  It's one of the reasons I refuse to have secrets in the home my husband and I have created with our three  children. Sick homes have secrets. Healthy homes have openness.

Many adoptees are handed a life-script and the part they play is one where they are not to ask, nor question the secrets or the lies. Just play along. Be a good little adoptee, and do what you are told. Whether you are 4 or 47.  You are still considered the child, and expected to play by their rules...after all, they know what's best. 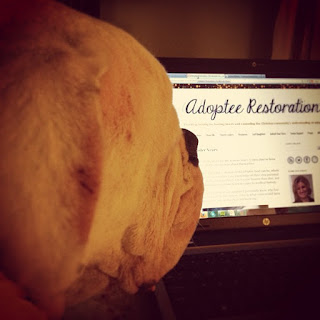 Dogs are playful but they aren't players. Big difference.  There's no shame in their game. They have no secrets or lies, they just show up as they are.

My dogs' reality is this: “Deanna, we love you and we are counting the moments for you to come home again…”

They greet me, boundless joy, eyes lighting up when I walk in the door, lavishing affection that feels oh so wonderful.

Holding no secrets and telling no lies.

What's not to love?