Marriage and Surprises and Adoptees, Oh My!


My husband changed his initial engagement plan, otherwise we may not have ended up getting married.

Once engaged, Larry told me of another idea he almost went through with.  He planned to get a ladder, lean it against the outside of my college dorm room, climb up and knock on the window. When I opened the window he was going to ask me to marry him while holding out a helium balloon with what I would think was the engagement ring tied to the balloon string. Just as I reached for it, he was going act as if he lost control of the balloon and let it go off into the sky. The plan was to let me freak out --believing my engagement ring was irretrievably gone. After a few moments, he was going to pull the real ring from out of his pocket and say, “Gotcha! Surprise!" and propose for real.

Needless to say, it's likely I would have slammed the window shut and walked away, I would have been so upset.

He did end up surprising me for our engagement. Months before he asked me what colors I would want for the wedding if we ever got married. I said, “Something bold. Most likely red.” He took note.  When it was time, he arranged with his boss, Lisa, a mutual friend, to have me on the beach in Avalon, New Jersey, at sunset. Lisa used the excuse of taking some photos and needing my assistance. I had no idea I was getting engaged so I was wearing shorts and a t-shirt.

We journeyed along and as the sun was just beginning go down we came upon a gazebo and Lisa said, “oh, isn’t that a lovely spot…let’s go closer.” We approached the first step and Larry appeared as if almost out of nowhere…wearing a tuxedo, (with a red tie/cumberbund). Suddenly, it was just the two of us. I was stunned and had no idea what was happening. The first thing I said was, "Oh my gosh...what are you doing here?"

He held out a ring box, saying, “I love you Deanna…will you marry me?”

It took me a minute to get my bearings, but I knew I loved Larry and I wanted to spend my life with him and I responded, "Yes! Yes, I will." 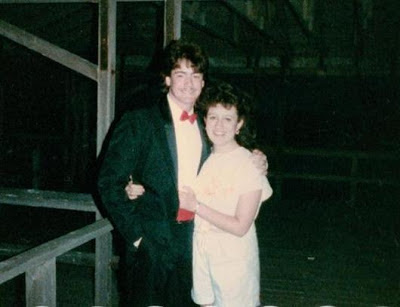 Like many adoptees, surprises are something I have struggled with. I have grown to be able to handle what I call "informed surprises," but it took a lot of understanding to get to the place where they were actually a blessing and not a source of pain.

When a person has faced any significant loss or trauma it will affect their marriage. Post-adoption issues may lead to further trauma if an adoptee does not receive understanding or help, especially from their spouse, who they count on for support.

Important note:  I am not saying every adoptee dislikes surprises.  I realize we are not identical, nor our experiences. Personally, I feared surprises more than I disliked them. Although we aren't all the same,  I have noticed that it seems a disproportionate amount of adoptees struggle with this. For instance, this week I made a big announcement on the Adoptee Restoration Facebook page. The night before, I posted a status update: "I have a big surprise to announce here tomorrow!" and in response adoptees immediately came back with, "You know we don't like surprises!!"

I am not sure what every adoptee senses when surprises happen for them. In rare times, they have been a joy for me but mostly they are a trigger. I have an "out of control" feeling, followed by a "people were meeting behind my back," feeling, followed by a "this makes me anxious" feeling. My emotional equilibrium is off and I'm unsure of how to act. I usually rub my fingers tensely together under the table, talking to Jesus in my head, in between saying things out loud like, "Ohhhhh,chocolate cake...my favorite" and "You came all this way...just for ME?"

Larry has always had a strong desire to surprise me.  When we first met, He couldn't understand why anyone wouldn't like surprises. He thought they were like ice cream. Everybody should love them! But my life experience has affected me in such a way that, I have a strong need to not be surprised.

One of Larry’s ways of showing love is to plot and prepare behind my back to create something he thinks I will love, and sweep  me off my feet with it. But my way of feeling loved is to feel safe, secure and never be shocked by him or a bunch of other people planning behind my back, even "for my good."

Twice in public he surprised me and I ended up burying my face in his chest and just standing there frozen, hoping we could stay like that until everyone was gone. Of course he pried me away from his chest and looked into my eyes and said, "Sassy, (his name for me) what's wrong? This is supposed to be fun. Come on, just have a good time!"

At times it felt like such futility to get him to understand.

I gently explained to my husband that showing real love to your spouse is giving them what they really need or want, not simply what you want them to have.

When Larry and I began pastoring 25 years ago, my mentor was Jean Coleman, co-pastor of the Tabernacle in Laurel, MD. Jean told me the story of when she and her husband Jack first got married and she cooked breakfast for him the first time and accidentally burned the bacon. She apologized and Jack spoke up and said, “Oh honey, that’s okay, it’s actually my favorite. I love burned bacon!” So she proceeded to burn the bacon on purpose, every single breakfast after that for a long time.

Finally years later when in a restaurant, Jack ordered his bacon, just like Jean ordered hers. She asked him why he ordered it that way, since his favorite way was burned to a crisp. He confessed, “Jean, I hate burned bacon. I just didn’t want to hurt your feelings the first week we were married.” All this time she had been burning the bacon because he was afraid to tell her the truth for fear of hurting her feelings.  Jean advised me, “Deanna, never lie about burned bacon, or anything else. Tell the truth to each other, always.”

We chose to tell the truth, from the beginning.

Our marriage is a safe place to say things to each other, like:

“I was disappointed with that movie, but being with you on a date is what it's really all about...”

"This particular dish is one I'm not crazy about, but your chicken casserole is amazing!"

Honesty is not just the best policy, it’s an essential building block to a healthy relationship.

My husband tried so hard to please me in the beginning with surprises being a huge part of what he did. I knew after his endeavor to make me happy it might emotionally kill him to say: “That took me to a scary place." After he orchestrated an elaborate surprise and said, “Babe, didn’t just just looooove that?”  he desperately wanted my feedback  to be, “Oh yes! Thank you! It was all I ever dreamed of!” But in saying that, I would essentially be saying, “Yes, I love burned bacon!”

I needed to be honest. So I was.  Gently. Still, it hurt at times. And I hated that!  There were times early on in our marriage he was so frustrated he said, “I just don’t know how to please you.”

He started listening. And things got better.

I explained that if I was going to actually enjoy a surprise it would need to be what I call an “informed surprise.”  I could only genuinely enjoy a surprise if I had talked to him ahead of time of what was safe for me, emotionally. And the only way he could find out was to study me and learn! A lot of this came through being married so many years and developing greater intimacy. A lot of the crash and burns with surprises happened early in our marriage because he simply didn’t know me well enough yet.

Me: Babe, it was amazing…you put so much thought into it and I appreciate it. The only thing that made me a bit uneasy was that *Janice was there.

Him: Well, I thought you got along with Janice. I'm sorry it made you anxious that she was here. I only felt like I needed to invite her because *Cynthia was invited.

Me: Even though I was happy to see Cynthia, it would have been better to leave her off the guest list if you felt you had to invite Janice too. That was awkward for me...

Him: I wish I would have known that Janice would make you uncomfortable .

Him: It was a surprise, so I couldn’t ask.

Him: How am I supposed to surprise you?

Me: You don’t have to. Just be my husband and love me. You aren’t required to surprise me.

Me: I know. But I don’t need to be shocked to be loved.

Him: I’m a shocking kind of guy.

Him: All I just wanted to do was surprise you and now your feelings are hurt.

Him: I just wanted to make you happy.


I was honest with him when he’d ask me my thoughts after a surprise. Even when it was uncomfortable. Otherwise the same thing would happen again. Janice would have been at our next party, and I'd be eating burned bacon going to the restroom a lot.


Larry asked questions for the future like: “If you could have a gathering of friends for a special occasion, how many would you want to be there? What’s too many? What’s just right?” (I like small groups, Larry likes big ones. My favorite evening out includes two, or at the most four other people. His includes like...100 people.)

Over time he asked me lots of questions in between surprises to make sure that nothing in a future surprise would leave me feeling uncomfortable.

Larry's not the only one who asks questions. I ask just as many, to find out what his desires are. When it comes to making him happy, I want to find out how I can do that and meet his needs as best I can.  I know he loves surprises and he loves them big! So I don't mind planning them for him, in fact it's so fun -- because I know he's into it!  His favorite is walking in the room, turning on the light and having me jump off the dresser...naked.

Unfortunately he's super good at figuring out surprises, so it's hard to pull one off on him!

Most of all, it's about listening to each other…and listening well.

By the way babe, if you’re reading this…should you ever decide to surprise me with the piece of jewelry you know I want, do it when we’re by ourselves. No one there. Totally private place. Location doesn’t need to be fancy, but I want it to be just me and you.  Thank you so much for listening. ~  Sassy <3