Horrible Things People Would Never Say
(That Are Said All The Time!) 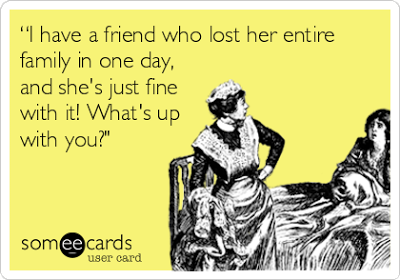 “I know a girl at church whose mother was killed by a drunk driver  and it was never any different for her, being raised by her Dad's new wife."

“My neighbor had a son who got lost and never came home, but she never talks about it. She must be fine.”

"I kinda wish my parents would have died. I've always envied people whose parents died and were able to get new ones."

"God redeemed you through your parents death. Isn't He amazing?!"

"Friends whose spouses die are lucky. They are extra special because they have the choice to pick new ones. Better ones. Ones with more money who can provide them with a better life."

"My cousin doesn't even want to know how his parents died, or search for their bodies. He has no interest."

“My best friend thanks God every day that her parents disappeared. She knows it was God’s plan and gave her opportunities she would not have had, if her parents stayed in the picture.”

“My friend Carol lost her entire family in a car accident, but it was God’s will, to give her the replacements she has now.”

“I know many women who had miscarriages and it never bothered them at all.”

“I lost both my parents, but it has never affected me.”

“Everything happens for a reason! It must have been God’s will for you to lose your family.”

“I know two young adult twin brothers who lost both their parents and it never seemed to phase them. They’re doing just great!”

"Have you seen the testimony of the girl on Youtube whose parents were killed but she is so grateful and thankful? I'll send you the link...I think you need to see it."

“All things work together for good! Your parents died for a reason!”

“It’s all a matter of perspective and what you focus on, now that your entire family is dead, just refuse to dwell on it and you’ll be happier."

"The fact that your family is gone isn’t what matters. All that matters is how you respond.”

“My babysitter’s brother’s uncle’s cousin’s square dance partner lost his brother and sister all in one day and he says he knows it was all for a reason and accepts it just fine. It’s so weird that this is bothering you.”

Would you ever say these kind of horrible things to people in response to them expressing their loss?

Then please, for the love of God, stop saying them to adoptees who have the courage to express loss or pain over the loss of their original families, their identity, their original name, their heritage and more. Many of us have heard these statements in abundance over the years regarding our adoption. And it never helps. It just cuts into our soul one more time, creating fresh wounds.

It takes guts for adoptees to express their feelings in the first place. Lack of understanding is prevalent, and we often hold back in sharing what is in our heart, because we fear additional pain.

The fact that you know many people who are adopted (or even that YOU may be adopted)  and never express any grief over it, or a desire to search, is irrelevant when it comes to another's grief.To dismiss a person's pain on the basis of knowing someone else who does not share the same, is cruel.

People handle loss in different ways.It does not make them right or wrong, it just makes them different. Which is how God made all of us, by the way.

To poo poo someone’s pain or chastise them for their response to loss is not only uncool, it’s cruel.

If people express pain and loss, just love them.